Articles › What options do I have to backup my Android device?

What options do I have to backup my Android device? 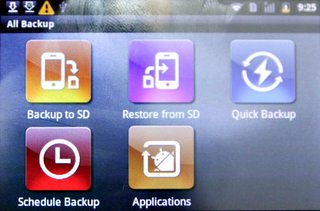 So you are thinking about having a decent backup1 – that’s a very good thing to have. There might come the day you need it: something horribly going wrong, and the only way out being a factory-reset. All your settings, apps, and their data gone for good then. But what options do you have? As the teaser already pointed out: what the manufacturer gave you rarely suffices here, and often does not even cover all your apps and their data – let alone system settings, your stored WiFi hotspots, and so on. Ah, you rely on what Google does backup? Don’t bet on that (especially not on the restore part, which reportedly doesn’t work reliably – though chances increase with newer Android versions and Nexus devices, you at least cannot tell it when or what to restore).

Which means „automatically shipped solutions“ are rather ruled out if you want something complete and reliable. Let’s take a look at available alternatives then. 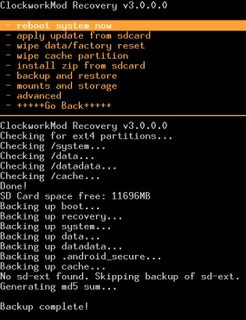 A Nandroid backup is the most complete thing you can get. Instead of checking for files, it simply takes the entire storage – creating a disk image of each partition and storing it onto your SD card. So you end up with „virtual clones“ not only covering each existing file from your device, but as well being suitable for file carving to even recover (accidentally) deleted files, using tools like PhotoRec or TestDisk. Or to fully restore your device to that point in time when this backup was created – apps, data, settings and all.

Sounds too good to be true, right? So there must be a catch. It is: To make a safe and valid image, the partition should not be in use. So this is done from the Android recovery mode – which is something like a separate rescue system you can boot into without launching your usual Android system. OK so far, but: manufacturers do not integrate Nandroid into their recovery images.2 Ouch. So you have to revert to so-called „custom recoveries“. The most famous ones include ClockworkMod Recovery and TeamWin Recovery Project, but there are several more.

Installing such a custom recovery involves unlocking your bootloader, so in most countries this means voiding your device’s warranty. Still, not only a custom recovery often is the pre-condition to install a custom ROM, but it brings you features additional to backup/restore and rom flashing – such as being able to wipe the Dalvik cache, fix several issues with file systems, and more. And as they also feature an ADB daemon, they give you opportunities to deal with your device even if it no longer boots up normally. It’s definitely something worth considering. 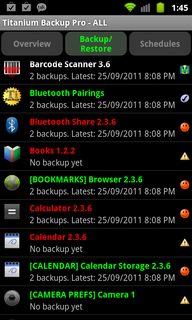 Titanium Backup is the most famous backup app on Android – and in fact more than that, as its feature matrix shows: of course it lets you backup/restore your apps, their data & settings, your system settings, and more. In the pro version you even can automate a lot and run batch jobs. You can setup filters for different tasks, can schedule those tasks, and e.g. have it automatically backup all changed app data at 3 am while you’re sleeping and creating a full backup every Sunday night. You can have it optimize your Dalvik cache, freeze unwanted apps (even system apps) or remove them entirely from your device, convert user apps to system apps and vice versa – heck, you could even use it to backup all the apps you want to keep (including their settings & data) to a flashable ZIP file on your SD card, then completely wipe your device (see the „custom recovery“ stuff above), flash a new ROM, and that created ZIP file afterwards to have them all back!

Titanium Backup Pro was one of the first apps I acquired years ago, and I’m still using it today. It proved as a reliable helper when migrating to another device. As it stores multiple generations of backups, it even helped going back to a previous version of some app that „went broke“ with an update (or to restore yesterday’s data for a given app when I accidentally screwed up something). As only few will do „nightly Nandroid backups“3, TiBu is a good addition even if you have a custom recovery with Nandroid integrated.

So what’s the catch here? You might already have guessed it: to do all the stuff described above, this app requires root powers, so your device must be rooted if you want to use it. Which in most countries again means a voided warranty. Well: seems every full dose comes with some hangover …

Oh, we do have a third option, luckily. And it even ships with the device, ready-to-use! I’ve already introduced it with an article last year: ADB for end-users. Still requires some installation/configuration tasks (see the linked article), but then you can use it to backup your apps and settings to your computer, or use Helium Backup to do it directly on your Android device (see Backup & Restore in that article for a detailed description and short how-to). No root required, no device modifications needed, warranty kept. Covers apps, their data, system settings, and even your „shared storage“ (SD card contents) if you wish so.

Sounds perfect, right? Which usually means there must be something we overlooked. Did we? Unfortunately yes. Developers can decide having their apps excluded from this kind of backup. If the backup of a single app results in a 41 byte file (that’s the backup header), you’ve found such an app. If the developer is not willing to lift this limitation, the only way around this is to root your device, get the Xposed Framework running on your device, and use the Backup All Apps module. As the name suggest, that lets you backup all apps then via ADB, effectively lifting that limit whether the developer wants it or not.4

Though there are tons of backup apps available for Android, when it comes to full device backup the three methods above are all we (users) have. Without root, ADB backups are the closest you can get to a full backup. Other, more complete methods require device modifications which, in most countries, make you lose your device’s warranty. Personally I wish more manufacturers would take the Sony approach for all their devices. This not only would enable users creating reliable backups they can trust (without reverting to 3rd party tools) – but also to flash new Android versions (in terms of custom ROMs) once the manufacturer ends the device’s support life-time. If the user wishes so.