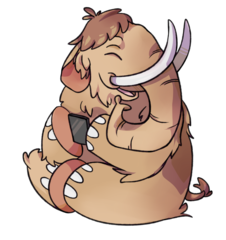 Wherever the Fediverse is mentioned, Mastodon usually is the first service coming to mind. Its namesake (and name giver) also serves as its mascot, so you will find it in many places: the logo, default avatar, and as place holder everywhere.

Mastodon is a Microblogging service which you could compare to Twitter (to a degree: we’ve got „friendly mammals“, they’ve got „angry birds“

). But differences can already be found in small things: a „Tweet” is called „Toot“ and instead of 280 chars can contain up to 500, you „boost” it instead of „retweeting“ – and as we’re in the Fediverse there’s no single central server, but thousands of interconnected („federated“) instances. Each of those instances is managed by its own admins, who usually also installed it: the software is freely available, so everyone can run his/her own server and integrate it as „instance“ into the federation. So there are instances of quite different sizes: starting with the small „family-server” via instances of smaller organizations up to „flagship-instances” with thousands of registered users. 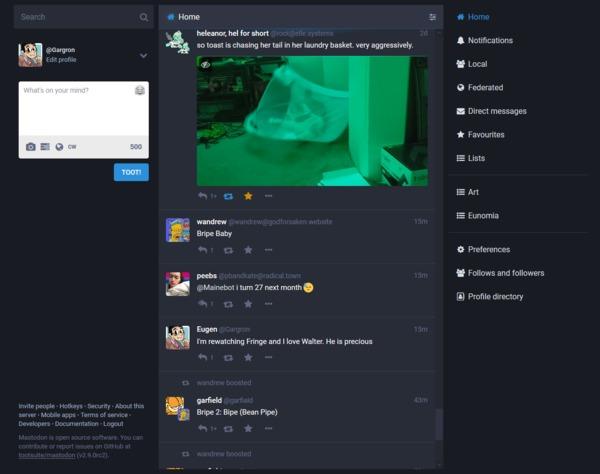 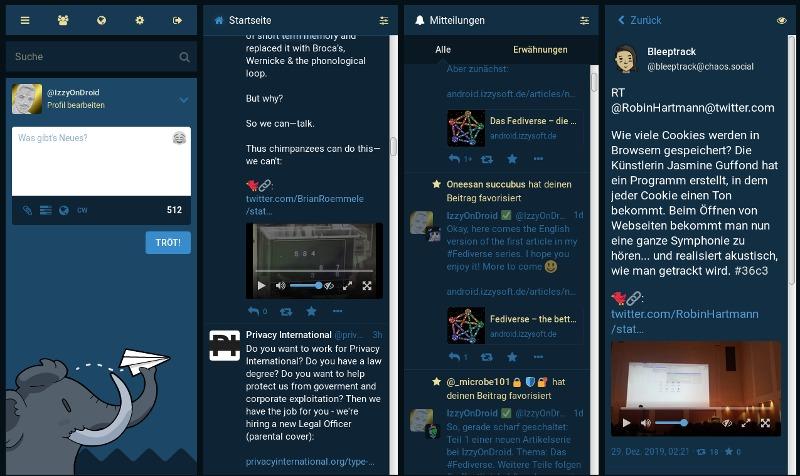 Mastodon was brought to life by Eugen Rochko from the German city of Jena. He started development in März 2016, and made the project public for the first time on October 5th 2016 at Hacker News. Though it initially „went viral“ only in France and Japan, other parts of the world meanwhile catched up a lot.

But what makes Mastodon so special, in the user’s view? A user going by the nick „Der Tillste” summed it up quite nicely:

(raw translation: „I like Mastodon as I can walk here at my own pace. Nobody pushing ads down my throat, nobody pre-sorting my timeline, nobody selling my data. No salty community, no Russian far-right bots. Instead of all that many kind and crazy people, most of them ticking the way I do. And the extremists who might show up here, I can easily block myself.“)

How to use Mastodon?

There are many ways. If you first want to get a feeling for the network, a web browser of your choice is sufficient. Even if you’re on a small-screen mobile device. If you later feel the need, you can „go native“ anytime using a mobile and/or a desktop client (see below). All work by the same principles, so even switching shouldn’t be a big issue with another „learning curve“. Also take a look at the short video intro named What is Mastodon?

Other than with Twitter (where some unknown algorithm sorts the tweets), at Mastodon we have Timelines – which means toots are shown in the chronological order they were created. Going by the speed they usually fill, there are

There are additional views which are, strictly speaking, no timelines:

The act of sending a message is called „tooting“ (or „to toot“) – the message itself a „Toot”. It can contain text, but also pictures or videos. Did you attach a picture or video to a toot, you can (and should) give it a description; this enables users who have problems with their eyes (think „blind“ or nearly so) to grasp its contents using a screenreader. Got concerns the content of your toot might shock/annoy some users? Hide it behind a „Content Warning” (CW). Now a potential reader must actively confirm to view it (and thus can easily avoid seeing it).

You can address other Mastodon users directly, mention their name preceded by a @, so they get „pinged“. If it’s a user on the same instance, the simple nick is sufficient (e.g. @peter). Does the addressed user live on a different instance, you need to call out the „full name“ (including the instance) – for example, @IzzyOnDroid@mastodon.technology. As you might be used to from other sites, there are #hashtags you can use inside your toots – to make them easily found via the search function (or filtered out from the timeline by users who want to avoid the given topic). Further you can control the visibility of your toot, restricting who should be able to see it: only the addressed person(s) („direct message”), just your followers – or should it be public?

To share toots, whether your own or not, you can „Boost” them. You can also „favorize” (or „star“) them – which is usually done to show you like a specific toot; but it can also be used to „bookmark“ it for when you later browse your favorites.

How do I choose my instance?

As already mentioned, there are thousands of Mastodon instances to chose from. This might seem confusing as you’re not used to that from „common services“ – but if you think of email, it no longer sounds that crazy: you chose a „provider“ who meets your expectations/requirements, and then can communicate with users hosted at different providers as well (would you even think otherwise there?). But how to select? Fear not, there‘s some help:

You’ve made a pre-selection, but still cannot make a final descision? Simply follow the „local timelines” for a while to get a feeling for the instances. Given a little luck, the admin pointed the /public page there (and not to the federated timeline), as it is the case at e.g. https://norden.social/public. Or you browse the /explore page to see who’s living there. Alternatively you can of course seek advice from friends already active at Mastodon.

Want to „go native“? Here’s a small (and in no way complete) list of apps available:

Numbers change daily – and I cannot update this article that often. But the account Mastodon Users publishes them hourly for all instances known to him summed up. As of today that means almost four million Mastodon users.

But even if the user count is constantly increasing: every know and then an instance „sinks“ (closes down) – e.g. if the admin has to give up for personal reasons and cannot find a successor. Usually that‘s announced well in advance (I didn’t hear of an exception yet), so members have time to move. Luckily Mastodon meanwhile offers means of „migration“, where you can take most of your data along (as Eugen explains here in short). This feature will be worked on to improve: currently, e.g. your toots would not be taken along. Missing parts can be moved manually via the Export/Import feature in your instance’s settings, though.

Also worth mentioning: not all instances are moderated with the same diligence. So be careful and forgiving when browsing the federated timeline. Should it get to hard, you can e.g. contact your instance’s admin to ask for help, who might know a way hidden to you – in the worst case (s)he can „block“ the offending instance from showing up on your end (if it’s just a single user, rather use your own block list).

If you just arrived from „Bird-Site“ and want to follow some of those „left there“, you can do so – though read-only. For this purpose some „bridges“ were built. To not spam other people’s timelines you can do so „personally“, instead of having those Twitter users „cross-post“. One of the services offering that is BirdSiteLive. There in the search field you enter the Twitter handle of the account you want to follow, and are presented with a corresponding „Fediverse-Handle“ – which you then copy into the search box of the Mastodon Web-Frontend (see above screenshot) (or your Maston client if it supports such), press enter and finally click/tapp the „head with the +“ – done.

In case you wonder: As you can find all around the Fediverse, this service is made up by multiple instances as well. Here it even has a double purpose; it’s not only load-balancing, but also avoiding to hit the Twitter API limits. So pick a „random“ instance from the list, and enjoy!

Get reminders to not forget image captions

If you post images, you should always add captions to them. Ive already mentioned this feature above – its important especially for the visually impaired. Screen readers just can read text, they’re not capable of describing images. So please don‘t neglect them. It you tend to forget accidentally, there are friendly bots around which can remind you; you can e.g. follow the Please Caption Bot which then follows you back and, whenever you post an image and forget to add a caption, will reply with a reminder (etter late then never, right?).