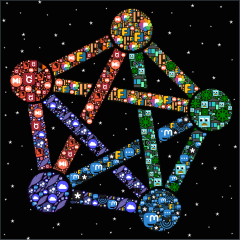 Social media are omnipresent. Everywhere you read: „Visit our Facebook Fan-Page”, „Follow us on Twitter/Instagram”, „Join our WhatsApp group”… And all services behind that share some common facts: they are run by big companies, are intransparent, bomb us with ads, collect our data (while it’s never clear what actually happens to them, apart from when some scandal turns things up – also see the corresponding sektion in my link collection) – and keep their users captive in „walled gardens”, where a break-out is hard to achieve (you cannot take your data along, and finally most users surrender saying „all my friends are also here – why should I leave, and where to?”). Communication across platform borders is rarely possible, either („you’re not at WhatsApp? How shall I reach you then?”).

For the majority this seems to be an unchangeable fact – and is (even if sometimes grudgingly) accepted. But as the services in the Fediverse show, this can indeed be done differently.

The Fediverse incorporates many services (screenshot of fediverse.party)

What is the Fediverse?

The one or other might already have heard the word and wondered: what hype is that again? Wikipedia describes the Fediverse as follows:

The Fediverse (a portmanteau of "federation" and "universe") is the ensemble of federated (i.e. interconnected) servers that are used for web publishing (i.e. social networking, microblogging, blogging, or websites) and file hosting, but which, while independently hosted can mutually intercommunicate with each-other. On different servers (instances), users can create so called identities. These identities are able to communicate over the boundaries of the instances because the software running on the servers support one or more communication protocols which follow the open standard. As an identity on the fediverse, users are able to post text and other media, or to follow posts by other identities … 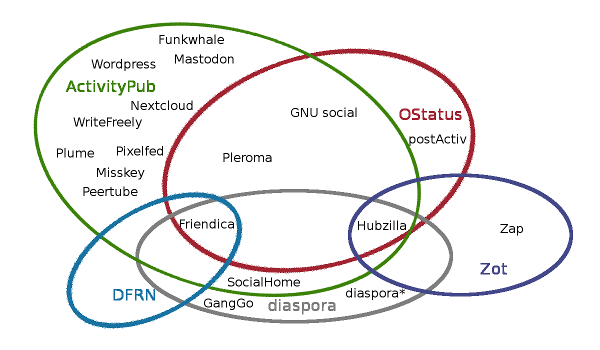 In plain language this means: no „walled gardens” – but a whole bunch of services connected to each other – and communicating using a common protocol named ActivityPub.1 Where ActivityPub is a standard of the World Wide Web Consortium – which a.o. means one can rely on a stable interface. This makes it easier for services to implement the protocol. Which is why many already did so, and others will follow.

As all participants are connected with each other this way, that also means: you won’t need a separate account for each of the services in order to communicate with your friends „living on another island”. This even works across different services: having e.g. a Mastodon account, you can also follow your friend(s) living on a PeerTube instance – and even actively comment there.

Which services can I find in the Fediverse?

Quite a lot, so I’ll just list a short selection here. Comparing them with „pendants“ in the world of „walled gardens” can be misleading; when I’m doing this here then just so you can get a general idea.

This is just a small selection of the better known services. Many more are e.g. listed at Wikipedia and at Fediverse.party.

Other than with the „walled gardens”, where the service is firmly under the thumb of a single company, services in the Fediverse are decentralized. So there’s for example not the Mastodon server, but thousands of them: everybody and his little sister can run their own Mastodon server (called an „instance”). Or their PeerTube, Friendica, Funkwhale server. Using the ActivityPub protocol, those servers can communicate with each other. You can rawly compare that with email: everyone is free to select a different provider, and still they all can communicate with each other. That’s how the Internet was intended to be.

The same way, rules are not established by a single company. Each community (members of the same instance) can have its own set of rules. For example, one PixelFed instance could decide to only permit cat pictures – while another instance declares those pics unwelcome. So you chose an instance you feel comfortable with – and still can communicate with members of other instances without any issue. You can also move to another instance later if you feel like; some services (like Mastodon) even enable you to take all your data (and followership) along.

You neither pay with your data for using the Fediverse, nor are you bombed with ads. Financing is mostly done via donations, using services like Liberapay or Patreon. But often instance operators have to cover most of the costs themselves, though they already carry the workload of managing servers and keeping the software and configuration up to snuff. So be kind to your hosts!

How big is the Fediverse?

There are no official or complete statistics. Nobody is required to register the service anywhere. But as the word „Fediverse” includes the „universe” part: quite big. Thousands of instances are known, each with between one and multiple thousands of registered users; the number of users hence is at least in the millions. If you want to visualize this universe, you can e.g. visit Fediverse.space. Don’t know a name? Just click the stars – and get details on the corresponding instance. 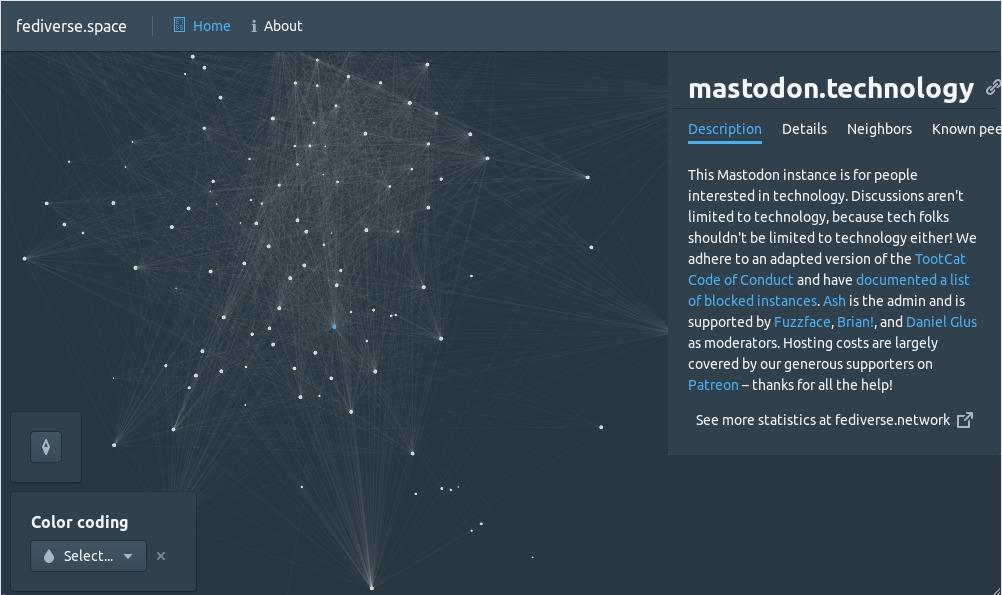 Some services (and how to use them) will be introduced with future articles here (see series index at the top).