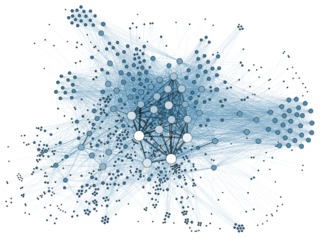 Next to Mastodon and PeerTube (which were already introduced), there are many more services in the Fediverse – the introductionary article already named some of them. But even outside the „known Fediverse“, there are decentralized services. The Federation takes the term a little further, including additional protocols.

E-Mail is one of the oldest services in the Internet: the first E-Mail was sent 1971 by Ray Tomlinson – so one in more year (2021) it will have its 50th anniversary! In the early years of the Internet, E-Mail was the most important and wide-spread service. So it seems legit to claim that originally, the Internet was planned to be a decentralized medium. Commerzialization and centralization only began about 20 years later.

Even today, E-Mail still is decentralized: you can communicate across the boundaries of different providers. So no „walled garden“ here. I’ll save you from further details at this place – assuming my readers are quite familiar with E-Mail.

XMPP (formerly known as Jabber) actually is the name of a messaging protocol – but in common parlance, is also used for the service using it. So it’s a „Messaging“ service. Did someone say Jeh… ahem, WhatsApp? Yes, that too is based on XMPP – but uses a modified variant to make sure not being inter-operable with similar services. The same applies (or applied) to Google Talk and Google Hangouts.

Thanks to free software like Prosody, Ejabberd and others it’s readily possible to self-host an XMPP service. The (unfortunately incomplete) list at The Federation mentions (as of 1/2020) 55 such nodes; other lists can be found at DatenschutzHelden and at UbuntuUsers. Analogous to E-Mail, XMPP uses the pattern benutzername@server to identify accounts1. Communication is, depending on settings and client-capabilities, End-to-End encrypted2. Functionality is continuously expanded via XEPs3, which are then implemented server-side as well as client-side.

XMPP offers room for personal communication between two participants – but also for interaction in groups. The latter is called „MUC“, which stands for „Multi-User Chat“. Each participant can create such rooms, which can be either public (everyone can join) or private (participants need an invitation to join). Over time, a whole string of public rooms for specific topics4 has sprouted – including such giving support for XMPP software like Conversations or Gajim.

XMPP is a good alternative to messenging services caring nothing about the privacy of their users (despite continuously saying so) and often (e.g. because of their TOS) cannot even be used in compliance with GDPR. Operating XMPP clients doesn‘t even differ much from that of their centralized counter-parts; the obstacle is rather often getting your own contacts to join.

And bevor you ask: yes, there is a whole bunch of other decentralized messengers, like Matrix. But I cannot discuss them all here – I don’t even know them all.

Oops? Sure: if you have your websites properly hosted (instead of relying on certain „Fan-Pages“5), you contribute to decentralization. Thanks to several search engines, they nevertheless can be easily found (where there’s a will…). Of course not everyone is a (web-) developer. But there are also multiple CMS „kits“ which enable even the non-tech-savvy to create and maintain a website. Best known of all certainly is Wordpress, which you can even integrate into the Fediverse – and for which you can find plenty of tips and workshops (e.g. in German from security expert Mike Kuketz – including how to choose a good hoster or, for the advanced, the right hosting setup on your own server).

Step done? Then don’t let yourself be misled again by Google; this data-collector will try to talk you into using their AMP (Accellerated Mobile Pages). Why this (and similar approaches) are crackpot ideas, you again can read in Mike’s blog. If you don’t speak German, use your favorive search engine – or start with reading this article.

Oh, you are „googling“? Are you also „amazoning“? I’ve long stopped using the former term – and never started using the latter. After all, there are search engines fitting my privacy standards much better. And even work decentralized/distributed6. Here I can, as I’m used from the Fediverse, pick my „home instance“7 – and search the web without the danger of being tracked.

I certainly could carry on indefinitely – but I have no claim to completeness. What should have become clear is: Nobody can force us putting our data into centralized silos, or locking ourselves into „walled gardens“8. It’s rather convenience (combined with lazyness to watch out for alternatives and give them a try) seducing us. And with that, we not only give profit-oriented coprorations power over our data – but also the means to manipulate us.9 It’s up to us to break free. And to set out!