NOGAPPS1 already was a wonderful thing – but a little tricky to get installed. With microG2, things became a lot easier, as I found out doing a fresh install of my good old Motorola Milestone 23 (aka Droid 2). And as everything runs that smooth and easy, I thought it´s time to introduce you to it – which I will do with this article.

Just like the NOGAPPS project, microG is completely Open Source – so everybody can inspect (and contribute to) the source code. This especially means: nothing happens „secretly“; with corresponding knowledge, everything can be verified. An important fact in terms of security and privacy – particularly when dealing with sensitive and personal data, as it is in our case. This not only is a good insurance against possible „backdoors“; it also helps to uncover and fix unintended vulnerabilities. And speaking about open source this also means the developer is not left to itself even with fixes, as other knowledgeable folks (read: other developers) can contribute [patches] for corrections or enhancements, which project members then can simply „accept“ into the codebase. With „open projects“ (not chained to a specific company), as we strive for here with „Android without Google“, such „open-source projects“ of course are especially loved and favored.

The description of GsmCore´s current implementation progress in the corresponding XDA thread´s first post also offers us some insight which functionality is covered by the original Google Services. Let me quote:


That´s quite a lot of stuff! And considering the project was still marked „Alpha v0.0.1“4, it´s extraordinarily stable. On my Milestone 2, accessing the Playstore using the BlankStore app worked without a glitch, and the same can be said for location services. I didn´t notice any difficulties with the Auth API; Google Cloud Messaging works reliably, Maps API I haven´t tested yet (but expect no trouble with it) – and everything else, sorry, I´m (currently) not especially interested in

This got much easier – or, as I wrote to MaR-V-iN in the mentioned XDA Thread: „worked like a breeze“. Almost no „toying at system level“ with flashing via recovery mode or manual copying (only exception for the latter: BlankStore5).

When those hurdles have been overcome, we can „go to the bone“:

There are several UnifiedNlp backends available at F-Droid9. I decided for two of them:

Simply let it do its job. Your own direct action is only required if you want to adjust the configuration (e.g. use a different location provider): 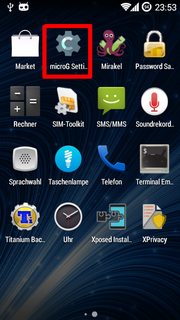 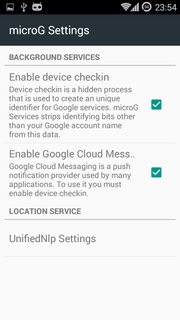 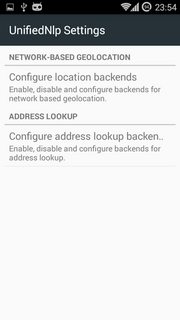 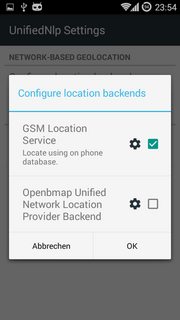 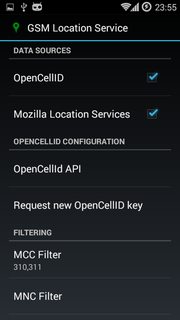 These steps I perfomed once. The database for LocalGSMNLPBackend I´ve created using lacells-creator on my Linux-PC (I do that about once per months, plus when I´m going to travel and need additional regions covered), and adb push it to the device.

Should some apps still refuse to be installed (error message „App not installed“, and „com.google.android.maps not available“ in LogCat), it might help to additionally install the old MapsAPI (see part 5).10

I´m fascinated: It got much simpler and easier compared to NOGAPPS a year ago, everything I´ve tested worked flawlessly and instantly. In my humble opinion, the term „Alpha“ here only refered to the state of features implemented – but definitely not to stability. Though it might well be this time it was me having luck with my device (I´ve tested the above only on one device yet). However: It looks lile nothing is standing in the way of „degooglification“ of my primary device anymore! (Update: Done, and works perfectly