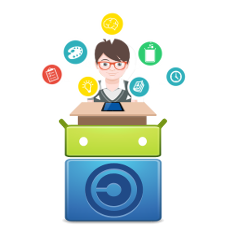 After implementing the first part, the repository is created and working: once you have included it in the F-Droid client of your choice, it can be browsed. But it looks a bit meager: no screenshots at all, and probably even an icon is missing here and there. This is quite unsatisfying for most – which is why this article should take care of the corresponding extensions.

Many additions build on the structures of Fastlane. I will describe the respective structure parts at the respective places. For a general overview with further details (e.g. recommended sizes for graphics) I would like to refer to my Fastlane Cheat Sheet as a reference. As an „example app“ I will use com.example.app again, and also use the directory structure mentioned before.

Since this is the most important thing for most of you, we will start with the graphics (and especially the screenshots) right away. The main thing first:

Graphic files need to be placed inside the repo/-directory.

So that’s what we do now, and create a directory there for our app:

Oops: What is the en-US doing there? F-Droid is inherently multi-lingual, and American English is used as a „fall-back“ for anything that is not available in the user’s language. So to make our graphics available to all visitors of our repo regardless of their language settings, we put them in en-US.

Directly in the just created directory two graphics can be placed: An app icon (as icon.png) as well as a so-called „feature graphic“ (featureGraphic.png or featureGraphic.jpg), which is then displayed in the detail view in the client above the app description. For the screenshots themselves we create another directory below en-US: phoneScreenshots. It would be possible to create more directories (e.g. for screenshots of 10 inch tablets, Android TV etc.) – but we don’t want to overdo it

Please keep in mind for all graphics that some of your visitors might have...

So please try to:

You don’t have to limit yourself to the phoneScreenshots directory, but can of course use the directories described in the Fastlane Cheat Sheet for the other formats as well. The decision is up to you.

Text files are placed inside metadata/.

Again, the structure follows that of Fastlane. So let’s give our example app English and German descriptions:

OK, we already looked at en-US in the screenshots. Shouldn’t it then also be called de-DE? As long as you don’t want to use certain language variants (e.g. de-AT, de-CH, de-DE) in parallel, suit yourself. Only en-US must exist, because it is used as fall-back – for all other languages the language variant is optional.

As described in the Fastlane Cheat Sheet, the appropriate text files can now be created in each of the language-specific directories. The two crucial ones are:

For the other files („icing on the cake“), please see the Fastlane Cheat Sheet.

Now, of course, it’s great to have the repo flying successfully and „nicely“ – only without users it’s a bit sad. So how do you make sure that the news gets around – especially if you only have a small „reach“ yourself? You make sure that it appears in as many repo lists as possible. For example, there is one in the F-Droid forum. Another one I maintain here. Also Mondstern maintains a list – both of us can be reached via Mastodon, for example, and are happy to receive hints.