How are the App Lists organized?

Using the „App-Lists“ tab, you will reach its main page: 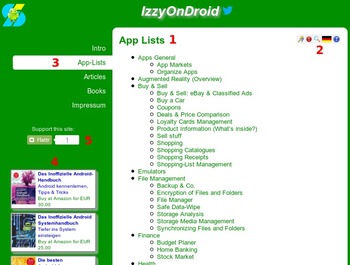 Here you will find:

Btw: Via the „blue bird“ next to „IzzyOnDroid“ you may reach my Twitter page, in case you want to feed my „paranoia“ („follow me“). In return you will always be informed whenever some segment of the app lists got updated, or a new category was added (as bonus also information/news on privacy, security with Android, and insecurity with our „spooky friends“).

My goal here was to combine as much details as possible in a compact way. Hence there are many MouseOver events on the category pages – just keep your mouse hovered everywhere to find some „easter eggs“ 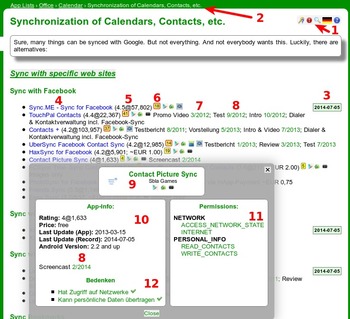 It should be easy to figure how to close the info box again. Just in case: use the „x“ in its upper right corner, or the „Close“ button at its bottom.

What is that „Google glue“?

Some apps are „glued“ to the Google ecosystem – which means, without GApps installed on the device, they are likely to be limited in their features or might even not work / simply refuse to be installed at all, in the latter case). That is because they are using APIs provided by Google apps. We can tell them by their permissions, and separate them into soft glued (feature limited) and hard glued (most likely completely blocking) apps:

Where are Apps linked to?

With „more information on the app“, links to reviews etc. are lead by a line of icons, which directly link to the app's page in different stores/repositories:

Where does the tracker information come from?

They come from two sources:

Both offer access via an API, which IzzyOnDroid uses to obtain those details. 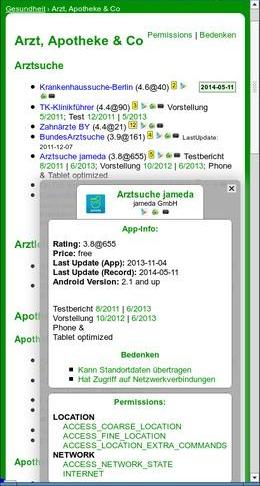 Of course I did not forget about smartphones – after all, they are where the apps supposed to run on. As soon as the display width falls below 480 pixels, above page looks a bit different – as you can see in the screenshot to the right of this text.

Moreover, that view „lacks“ some additional information otherwise shown below the tabs on the left side. To switch to the „desktop version“, simply bring your device into landscape mode: as soon as display width is above 480 pixels, view mode switches back.

Did I forget something? Maybe the not entirely unjustified question: How to experience a MouseOver event on a touch screen? Not possible? No such thing. If you long-tap on a link, your browser should open a context menu (to e.g. allow you opening it in a new window/tab). From there, chose „back“ (or use the „back“ key). That should leave the „mouse over“ event – as the mouse must have been over that before you „clicked“. Unfortunately, implementation sometimes is quite device (or rather manufacturer) specific, so you might have to experiment a little. For example, tap on the box with the permission count (6); as that's no link, it should simply bring up the MouseOver.

… I just mentioned. I don't like web sites where you've got to look out for the „real content“ in a mess of ads – hence I abandoned that option deliberately. Sure, links for my books point to Amazon, and so do some more. But what's shown here should always perfectly match the context, and felt like „additional/bonus information“ instead of „annoying advertizements“. Should that not be the case in some place, please send me a note!